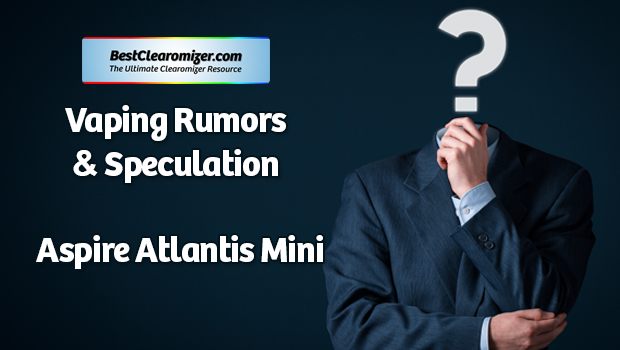 It’s obvious that two of the top companies pushing the envelopes of clearomizer tech are Aspire and Kangertech. After the success of the Atlantis and Subtank, Kanger was the first to iterate and offer smaller, more compact versions of it’s new sub ohm clearomizer.

The Kanger Subtank Mini and Kanger Subtank Nano have started getting into the hands of vapers, and first reports are looking good. Now many are wondering if an Aspire Atlantis Mini is on the horizon.

Information about a possible Aspire Atlantis Mini is few and far in between. As more (official) information comes out, I’ll update this post. Until then, we can make some assumptions.

First assumption, they will release an Atlantis Mini. Looking back at prior Aspire and Kanger clearomizer products and the trend is clear, both companies enjoy making new, updated versions or models of their existing clearos. Take the Nautilus or the Aerotank for example.

I see this trend continuing, and personally feel Aspire will launch an Atlantis Mini to compete with the Subtank Mini and Nano.

There haven’t been any specs leaked or announced for the Atlantis Mini as of yet. And it’s hard to guess what they may be.

If Aspire does only release one version, I think it will be closer to the 22mm Subtank Mini in size. Who knows though, we could see an Atlantis Mini and Atlantis Nano too. Either way, the original Atlantis has done well, and Aspire will want to capitalize quickly on its success.

Like I mentioned above, there is very little information on the Atlantis Mini right now, and there has been no timeline released. One would expect it to be in the first quarter of 2015, otherwise Kanger could build a lead in the new sub ohm clearomizer space.

As more information comes in, we’ll keep this post updated.

If there is something this post should mention, or you have some information or resources you feel would add value, or you just want to speculate with us, please leave a message in the comment section below.

Other Places With Recent/Breaking Vaping Information

All information on this post is purely speculative, and is not in anyway an official outlet for Aspire news or products.

One Response to Aspire Atlantis Mini Rumors and Updates