The latest RTA to hit the market is the UD Goblin RTA mini.

This RTA is a maximum flow rebuildable tank atomizer that features a host of cool options like a compact size, two “U” holes, colored tubes of your choice, and 3ml of tank capacity.

Parameters of the Goblin Mini

What the Goblin Mini Comes With in the Box

Right now, the specific features and specifications of this RTA are being kept under wraps.

In this Goblin RTA review, we’ll try to pin down as much intel as we can so you can make an informed decision on its worth to add to your collection.

Features of the Goblin Mini

Some of the features include:

What We Know So Far

The Youde company is keeping secrets but hey, it’s for their own protection.

For the Goblin Mini RTA, they’re keeping all of the major specifications to themselves to prevent others from creating a clone immediately.

Even before the authentic RDA releases.

It is available for pre-order though and if it’s anything like the Goblin V2, then we’re going to be really happy with it.

What we do know so far is that it’s a mini version of the Goblin RTA from Youde and air comes in from the bottom of the device via a cutout section and uses a clock type airflow adjustment.

Supposedly, it has more airflow than the original Goblin.

It’s just 28mm tall so it’s a tiny little thing with a ton of power. Big things come in small packages, and all that.

Even at that size, it still holds an amazing 3ml of juice so that’s pretty impressive right from the start.

We may not have the inside scoop on all things Goblin Mini, but we can tell you that rebuildables are for experts, not average or beginner vapers with no knowledge of how to rebuild atomizers.

These materials cannot safely be used by the inexperienced or those without basic knowledge of electronics.

Always test your coil and wick with a meter first and on a strong basic regulated APV that has short circuit protection and low resistance protection.

You don’t want to short out any of your mods or batteries, so always check your resistance with an ohm meter before firing.

What if it’s Just a Mini Version of the Goblin? 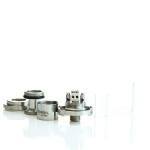 We know that the Goblin RTA has four post holes for an easy build and two large air holes on the deck.

Sounds familiar so far. Now the original Goblin is similar to the Aqua V2, the Fogger V4, and the Orchid RTA.

We also recall that the UD Goblin RTA makes it seamless to place a dual coil on it because of the quad post build deck.

We pretty much imagine that it will follow in the same footsteps and the Goblin Mini will have the stainless steel (actually, we do know that part already) with Vapowire Kanthal wire, and wicking material that is KOGA 100% organic cotton.

Plus, judging by the photos of this awesome device, it looks absolutely impeccable and ready to let you chase huge clouds and taste awesome flavor.

The Goblin has a 3ml and 4.2ml tank with no leakage so we wouldn’t expect anything less out of the Goblin Mini and imagine the same attention to detail will apply.

The Goblin is also refillable at the bottom of the base so to keep that convenience, it should be the same.