The new Kamry 30w v2 comes from Shenzhem Kamry Technology, the makers of the Robot Vaporizer, the Legend Vaporizer, and one of the most well-known products, the K100.

The Kamry 30w v2 has the company’s namesake and is one of the newest box mods on the market that combines compact ease of use with features you will appreciate.

Where to Buy the Kamry 30w v2 Box Mod

A Little Bit About the Kamry 30w v2 Box Mod 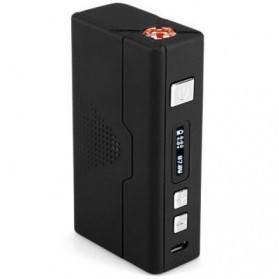 The Kamry Vape is one of the new vaping mods from Kamrytech. It has a myriad of features such as a recessed 510 threading connection, a magnetic back cover which makes it easier to change your battery, variable wattage, variable voltage mod, USB pass-through, and an easy to read OLED display. It’s made out of aluminum and zinc alloy but the outside has something that Kamry calls “Kristie” material which makes it comfortable to hold.

The concave surface on top where the atomizer goes is a nice look to an already pristine device and there is also a strip design on the outside which makes it easier to grip, and looks nice as well.

To change the variable wattage and variable voltage just takes three clicks on the firing button.

It changes in 0.1 watt increments and the buttons are well made and easy to distinguish between one another – plus, it’s very clickable and has a square shape, making it effortless to use.

To turn it on, press the fire key three times as well. 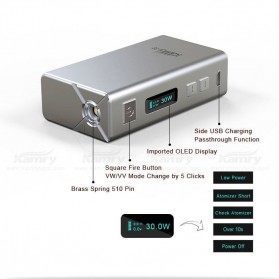 The Kamry mods have a large firing button that is stable and clicks well.

It also features a different look from the Kamry 30w v2 design.

The new look is more cool and sleek and looks more current with today’s trends.

Another difference is that the older version has an adjustable spring loaded pin made out of stainless steel and aluminum but the v2 Mod has the brass 510 pin.

The older classic colors included red, white, and black and of course the new version has black, silver, and blue and a shinier look.

There are a few things that make this unique when it comes to the mini box mod world.

For one, Kamry has a six year innovation, professional factory for producing e-cigarettes.

They do not produce clones and focus on the Kamry brand and style with utmost quality products.

The replaceable battery is an 18650 and must be bought separately.

The convenient magnetic door means that is is much easier to change the battery because there are no annoying screws to keep up with and it is much faster this way.

Of course, a magnetic door is not as secure as screws on a battery door but this one is strong and seems secure enough that you don’t have to worry about accidentally opening it when you don’t want to.

Charging time is about 3-5 hours but since you can vape while charging with the pass-through USB, you’re Kamry v2 is good to go.

It should be noted that with any mod that features pass-through charging, it’s still always suggested to charge your batteries on an external charger, just to be safe.

There are quite a few safety features included with the Kamry mod such as:

As with any box mod, it’s not something that is for beginner vapers but these safety features will help out with a few of the problems that can arise.

The Kamry vapes is so reasonably priced that you can grab this device for a fraction of what you’ll typically find others mods.

The Kamry Mod Review shows this mod supports atomizers 0.3 ohm to 5.0 ohm so it works with most any atomizer on the market. Variable wattage is 7w – 30w. Variable voltage is 1.4v – 8.0v.

The threading is brass spring loaded 510 pin so all of your atomizers will fit nice and flush.

There are multiple air holes which ensure that the device gets large heat dissipation and these are located on the bottom as well as the side.

They also provide venting should there be some catastrophic failure with the battery.

It’s pleasant to look at and small, but not so small that you can’t read it well.

Although the Kamry 30 is certainly a unique device, it is similar in structure and features to a few others like the Cloupor Mini 30w VW/VW Box Mod, the Sigelei Mini 30w Box Mod, and the Innokin iTaste MVP 3.0.

With the 510 threaded connection, you can use most atomizers. 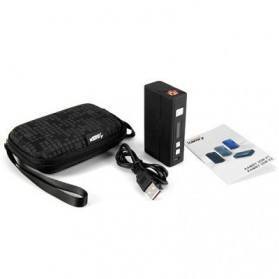 This is nice because you don’t have to lay it down in order to charge it and with the pass-through USB, you can vape while it’s charging as well.

The size is a little larger than a traditional Zippo lighter. It’s really small and pretty lightweight.

The Kamry 30 watt is compact, affordable, and packs a lot of power for anyone who wants a 30 watt mod.

Not only does it have a strong company backing, it has a price that is pretty inexpensive so that you can have a lot of options without shelling out a ton of money.

Less money spent on a good mod means you have more for your atomizers and your favorite E Juice.