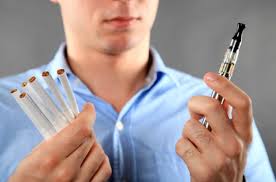 fact: many vape enthusiasts started out as either occasional or habitual smokers.

There’s a lot of debate about vaping as it relates to analog smoking, with some suggesting it’s just another crutch like patches or nicotine gum and others testifying that the switch to vaping may have saved their lives.

Of course, we now know that a cigarette is one of the deadliest things you can put in your mouth next to a live scorpion.

With all the noise coming from every direction about this new industry, determining whether vaping is any different from lighting up the old coffin nail can be tricky.

That’s why we here at BC feel the need to make a direct comparison of the realities of vaping and smoking, to allow our readers to make an informed decision for themselves.

We’ll start out with the burning question: is this stuff any safer for me than smoking?

The answer is literally right in front of your face whenever you flick that lighter, particularly for those who smoke nicotine cigarettes.

If you think about it, it’s relatively obvious that inhaling the byproducts of pretty much anything that’s on fire over a long period of time ain’t the best idea.

In any other context, heavy smoke inhalation results in immediate and well-deserved medical attention.

It’s actually surprising to imagine what we all went through for our nicotine boost just a few short years ago.

Understanding why cigarettes are so popular despite this starts with a simple realization.

It’s not the tobacco and friends that people enjoy during fun night out or after a really fun night in, it’s the nicotine thrown into the mix.

This concept is what makes vaping such a clear step up from analog smoking, as it essentially cuts out the middleman and gives the people what they want.

With vaping, nicotine is delivered directly to the system suspended in a solution of propylene glycol (PG) and/or vegetable glycerin (VG).

Both of these have been evaluated and classified by the FDA as safe for human consumption as well as having a long history of use in many common food and hygiene products.

There are even many varieties of e juice available without any nicotine at all.

Though, while the long term effects of vaping are currently unknown as there needs to be more unbiased studies, vaping is significantly safer than smoking traditional cigarettes.

Now, we understand if you don’t immediately take us BC folks at our word about vaping vs smoking.

McDonald’s has been calling those things “chicken nuggets” with a straight face for years, so there’s something to be said for protecting the reputation of the products you promote.

A little skepticism is the mark of intelligence and it’s great to hear we have smart readers, but perhaps the word of the American Heart Association may hold more weight with you.

That’s right, the AHA ran an extensive study on the effects of vaping, and turned out a 20-page paper to the public.

This paper detailing all the ways that vaping is much less dangerous than smoking.

“E-cigarettes either do not contain or have lower levels of several tobacco-derived harmful and potentially harmful constituents compared with cigarettes and smokeless tobacco.”

You can browse the entire document at your own leisure, but we think you’ll see we’re not just…um…blowing smoke here.

Besides cutting down on your intake of powerful industrial chemicals, vaping has a range of other wellness positives that could translate into social benefits.

You probably won’t even know it existed until after it’s gone, but trust us, it’s in your clothes, hair, car and mouth all the time.

People you know will sure notice the difference and once you’ve lost it, you’ll never want to find it again.

On the other hand, many e liquids are specifically formulated to stimulate all the most delicious things in the world.

Cinnamon buns, peanut butter cookies or tiramisu along with traditional menthol and tobacco flavors, few of which smell like the approaching aura of the Grim Reaper.

What’s in these Flavors?

If you’re wondering what’s in those flavoring agents, the answer is…well, food.

If you’ve ever eaten anything out of a box, can, or other package, you’ve already survived ingesting it thousands of times.

You may think you like the bold flavor of your favorite brand of smokes, but we promise there are better alternatives out there, even if it’s a twist on a familiar favorite.

For example, a cigar and coffee flavored eJuice is perfect for someone taking their first steps away from the pack.

The point is that you have choice with vaping, unlike with smoking where your big decision is “Regular or 100?”

Have you ever noticed smokers seem to be getting pushed out of…well, everywhere?

Laws are constantly tightening on the practice of smoking.

Just 10 years ago your average bar was filled with smoke nobody minded that much, the current trends indicate smokers will actually have to go out to sea to have a smoke within the next 10.

There’s only one sadder sight than seeing a group of smokers huddled in the cold or rain to get their fix, and that’s seeing the huddle from the inside.

Vaping is allowed in many more public (and private) establishments than smoking, and since there’s no flame or ash, cherry holes and soot stains are a thing of the past.

The fabrics in your life will appreciate that.

While it’s not illegal to vape inside most places, you should still ask the proprietor if it’s ok if you vape. A little courtesy goes a long way.

Do us a favor. Run down to the nearest store and check out the cigarette prices. Are they higher than yesterday?

It sure seems like it, with the price for a pack of cigs exceeding $10 in many areas.

Besides bringing the bumming of smokes to an all-time low success rate, the rising price of cigarettes has many smokers making tougher and tougher financial decisions.

However, if you’re sick of choosing between lunch and another pack of smokes because you don’t get paid until tomorrow, we’ve got great news for you: vaping is so much cheaper than smoking.

Just weigh it out with some simple math.

At $10 a pack, someone who smokes a pack daily is spending over $300 monthly, and that’s before we even discuss the price of lighters, ash trays, and breath mints.

Sound about right? If not, just tailor the equation to yourself.

Now, what does your $300 monthly cigarette bill get you from the world of vaping?

You don’t even have to buy everything again next month, so over time the savings will really start to add up.

When you consider that cigarette prices are going nowhere but up thanks to the rising costs of production, transportation and taxation while the price of vaping is going down.

The choice is clear from a financial perspective.

In case that weren’t enough, vaping can improve the quality of your life in other ways as well.

You may be surprised to learn that not inhaling burning materials can help you breathe easier, which makes a trip of the stairs much less of an arduous journey.

We’re sure you’ll miss that smoker’s cough, but it’ll fade with time.

The increasing stigma around analog smoking means that those who do light up regularly could find less social opportunities, as smokers are starting to get the “eww” treatment.

You might be invited to more parties since nobody will be concerned with you funking up their drapes with your smelly smoke.

Your dating pool just might increase, since nonsmokers generally don’t go for the yellow-finger look.

Even employers can look at you in a different light, as interviewees generally stand a better chance of employment when the interviewer isn’t thinking about where that cigarette smell is coming from.

If you’re not looking for a job, your existing employers will be overjoyed that you don’t take a 10-minute every hour.

You might have leverage to ask for a raise.

In all seriousness, anyone who makes the switch from analog smoking to vaping has made a positive decision that will affect their entire lives.

Vaping technology is one of the most significant and disruptive innovations in recent history.

Not only will it help improve the quality of life for anyone that commits to the change, it will help to destroy the influence of an entire industry that came before it.

There are many studies out there showing the benefits and lack of harm from vaping, so get out there and research it if you still don’t believe us.

In fact, if you’re looking for the main reason why the debate on the safety of vaping continues to rage so loudly despite so much clear evidence of its relative benefits.

You might want to think about the only parties that stand to lose anything from the change.