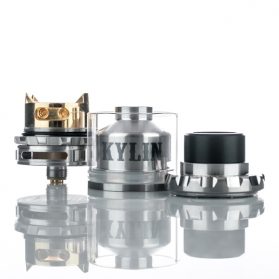 The Vandy Vape Kylin is a postless, dual-coil RTA that was one of the first to really buck the two-post trend that vents from directly beneath the coils.

This one vents through passages that rise up next to the coils and point slightly inward toward them, in addition to a couple smaller vents directly beneath the coils. It came with a lot of hype, but ultimately I feel like it was much deserved.

My first build on it was with dual coils of 28/36 stainless Clapton wire wrapped 6 times around a 3.5mm pin.

This was a larger build for me because most of my tanks don’t have the room to take a build of that size.

I wanted to take advantage of the generous wick wells at either end of the build deck, so I built with the idea of using a lot of wick.

I wicked it with rayon, and was indeed able to get a lot of wick in there, but it was still a little loose in the wick wells.

I was afraid of it backflowing up through there and onto the deck, so I pushed a little extra wicking material behind the wicks to ensure it was pushed up against the wet side adequately to prevent a free flow of juice past them.

I put it back together, starting with the tall glass, and filled it with my favorite juice.

The first few hits were at 25 watts from an iJoy Captain PD1865 just to get juice moving through the wicks, then I bumped it up to 50 watts and it really started to shine.

I like my airflow pretty tight, and the first click on the AFC ring was just about perfect for me. I vaped a few tanks through it over the next few days at around 60 watts and was pretty impressed.

Where it really starts to shine is when the tall glass is replaced by the shorter glass and chimney.

The flavor is much more intense from this configuration, and even with much reduced tank capacity (2.5ML compared to over 5 with the tall tank) I still vape it like this today.

That much flavor is just hard to give up.

What would I change if I could?

The top cap only turns just short of one complete turn from when it’s off until it’s tight.

This is a really fine thread, and only a single one of those threads is ultimately holding the cap on.

I feel as if I could twist that thread right off with my hands if I tried hard enough.

The good news is that screwing the cap on doesn’t create internal pressure, so it’s not going to push juice out all over your mod, your hands, your desk, your pocket, your dog, your grandma…

Incredible and intense flavor, super easy build deck. Wicking could be a little finicky for a novice builder.

All the airflow you could ever ask for, and easy enough to turn it way down if that’s your style too.

Top cap could be reengineered to allow for more thread engagement when screwing it on.

Definitely worth a full price purchase in my book, though.

This article was written by Matt Durbin