Have you been thinking about trying out an RDA for the first time?  Do you currently have an RDA, but

Have you been looking for a great new atty?  Did you read a Velocity RDA review and decide that this

The Council of Vapors touts the Royal Hunter RDA as a championship cloud chaser, and it plays the part as

I often am on the look out for the next greatest thing to be released in the vaping world.  I 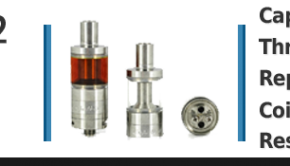 The Goliath V2 is the newest RTA from Youde and the latest revision in the Goliath series. This tank is

The Zorro RDA is designed as an answer to the common problems of smaller RDAs, namely lack of performance and

Maybe you’ve heard of the original Turbo RDA, maybe you’ve just heard it in action. In either case, the Turbo

The Hatrick Triple Coil Sub-Ohm Tank by Smowell is one of the newest in the industry. It’s built around a

The Horizon Phantom Sub-Ohm Tank is the evolution of the Arctic Sub-Ohm Tank. It introduces a two chamber liquid storage

Youde has introduced the amazing Zephyrus sub ohm tank which has replaceable dual coil heads and an awesome RBA section.

There are plenty of RDAs out there and many of them work great, as we’ve reviewed in the past, and