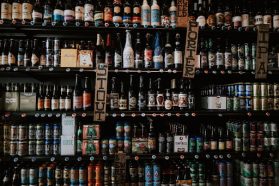 Combining pleasures like vaping your vape juice and drinking a cold, rich-flavored beer is a great way to end the day.

In this article, we are going to provide you with a few fascinating facts regarding the fine beers of the world and the e-juices you should be mixing them with.

We’ll go through every category in detail and give you some excellent recommendations about the smooth tastes you can achieve with the right combinations.

Vape and beer pairings that work really well together are not hard to come by, but it takes some trial and error before you achieve the perfect fit with the beer that suits you best.

To save you all that time, we compiled a list of combos you can try out and see what comes the closest to the desired taste. Let’s get this vaping and beer article started!

Stout beer is a dark beer brewed with roasted malt, roasted barley and hops, which gives it its distinctive dark color and heavy, rich flavor.

Today, there are more than a few Stout variations like milk, dry, oatmeal, chocolate, imperial, oyster stout, porter and much more.

The history of the Porter goes back to the early 1720s in London when it became the trend of that century.

The fact that it stayed fresh longer, that it was more vibrant in flavor, with more alcohol, and it was somehow cheaper, made the Porter the most famous beer in the UK for an extended period.

Of course, this changed with time, as trends often do. The most famous Stout beer today is the Guinness.

The Guinness originated in Ireland in 1759 in the St. James’s Gate brewery in the capital city of Dublin.

Now, in 2018, it is one of the most successful beer brands in the world, made in over 50 countries and available in over 120.

The famous creator of the Guinness is Arthur Guinness who developed the formula and started turning the beer into a brand.

An interesting fact about the Guinness is that it was proven that the antioxidant compounds’ in the beer are beneficial for the heart, and they slow down the deposit of cholesterol on the artery walls.

This exquisite beer should be combined only with the best vape juice.

We recommend you choose the Belvedere e-liquid because of the rich tobacco and the smooth vanilla taste that will be very complementary to the creamy texture and “burnt” flavor of the Guinness.

Another great Stout beer you should try while vaping is the Courage Russian Imperial Stout. It was first made in 1795 for Catherine the Great of Russia, which is why it’s still called Imperial Stout, and it has this royal hype to it.

However, the Courage Russian Imperial Stout is brewed only once a year, and the process is perfected to the tiniest detail.

The espresso body defines the flavor, and the pear overtones give it a fruity finish, which would go great with a rum flavored e-liquid. It will be like tasting a creamy, chocolate cake.

The Lambic beer is somewhat unknown to the mainstream market if you’re not a beer lover and don’t pay too much attention to specific beer types.

It’s brewed in the Pajottenland region of Belgium and in the Cantillon Brewery in Brussels.

Lambic beer is made with a spontaneous fermentation and wild yeasts and bacteria native to the Zenne valley.

However, the end result is magnificent, and the beer has a very unique taste to it. It has flavors like wine and cider, leaving you with a sour, dry aftertaste.

The Kriek lambic is the perfect example of a Belgian Lambic beer, made with sour Morello cherries.

There are a few Belgian native brewers that make this type of beer, with their own labels like Belle-Vue, Chapeau Kriek, Lindemans, Mort Subite and a few more.

What we recommend is for you to combine this incredible beer with a cherry-flavored vape juice. The e-liquid will enhance the taste, and you can thoroughly enjoy the aroma of sour cherries in your mouth.

Now we are in the German beers part of the article. Weissbier or Wheat beer is a top-fermented German beer, with a significant proportion of wheat relative to the amount of malted barley.

This type of beer was created in the southern parts of Bavaria, where it is still brewed today with a few important brands like Erdinger, Paulaner, Franziskaner and Maisel — famous all over the world.

There are also more varieties of Weissbier in the area, like the Belgian bière Blanche or the Berliner Weisse, which is a cloudy, sour beer.

Probably the most famous representative of the Weissbier is the Erdinger, made in the Erdinger Weißbräu, which is the world’s largest wheat beer brewery.

Johann Kienle founded the brewery in the distant 1886, and today it offers 10 different types of Wheat beer around Germany and Europe.

Weissbier has a characteristic taste with banana undertones, which makes it crisp and grainy — perfect for a banana vape juice. The flavors will complement each other nicely, giving you a blend of fruitiness combined with a creamy finish.

Kölsch is a bright, top-fermented beer famous for its golden, straw yellow hue, and even though it looks like a Pilsen beer, it’s far more characteristic than that. Kölsch is produced in Cologne, Germany, and you can really find it outside that region.

It was first introduced to the world in 1918 by the Sünner brewery, but the trend picked up after World War II.

According to the Kölsch Konvention of 1986 and the Kölsch beer becoming a protected geographical indication (PGI) in 1997, it is prohibited in Europe for anyone outside the Cologne region to brew this type of beer.

The most popular example of the Kölsch beer is the one brewed by the Cölner Hofbräu Früh brewery, founded in Cologne in 1904 by Peter Joseph Früh.

The Kölsch taste is balanced, soft and a perfect combination of the fermentation sweetness and finishing bitterness touches. Almond vape juice or hazelnut flavor would go ideally with this exquisite beer.