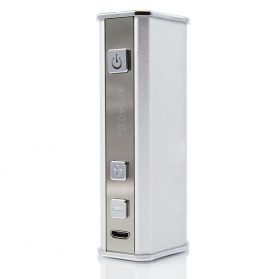 The new VaporFi VOX 40 TC Mod is an incredibly small and lightweight device which which can handle loads of up to about 40 watts.

It weighs at 4.25 ounces without the tank, and can easily fit absolutely anywhere.

As a matter of fact, fact, it is one of the smallest box mods in the market.

The VaporFi VOX 40 TC Mod crams lots of power and many amazing features into its’ tiny frame.

It is capable of putting out massive amounts of discreet vapor, and offers variable wattage which gives users lots of customization.

It has a brilliant matte silver finish, with black strip on its’ front. On the black strip, you will find the fire button, OLED screen, and plus & minus buttons, and also the charging port.

Its’ build quality is solid and superb. The buttons don’t rattle if shaken, and give a solid kind of feel.

Its’ OLED screen is quite bright, and is easily readable, and its’ charging port looks very robust. Overall, it’s a very sleek device.

The VaporFi VOX 40 TC mod has a chip which monitors all of the device’s condition, and what it’s dealing with. It also watches out for low wattage, low resistance, and short circuits.

With the microchip in place, you’re unlikely to ever experience any kind of malfunction which can ruin your mod.

The VaporFi VOX 40 TC mod is also well vented so there’s less likelihood of the cell blowing its’ top.

The VaporFi VOX 40 TC mod has a strong 35A builtin battery which can last for a day or two.

It comes with a wall adapter and a USB charger, allowing you to charge it from any location.

The device has a great feature whereby it enters standby mode when you’re not using it; therefore, saving battery power and making it last much longer.

This also reduces the chances of accidental starts.