Wismec has launched its 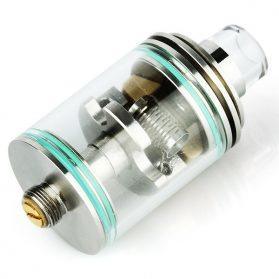 latest range of theorem RTA, that comes loaded with a series of features, functional tweaks and an awesome design. Is this new Wismec Theorem set to take the top spot in the RTA category?

The RTA Wismec Theorem comes loaded with many adjustable airflow options, a design that comes with top fill and a build deck that has an impeccable design.

This Wismec Theorem also comes with absolutely new and top-notch coil along with cotton.

The product has been incredibly designed by JayBO which in turn was further inspired by SMM.

This RTA is one of the most featured, rich and sturdy RTAs that you’ll ever come across.

The structure is made of stainless steel and it looks inherently beautiful and elegant.

Being made of stainless steel the body of this RTA is strong and sturdy.

On top of that, being a detachable structure, it can be easily detached as per your discretion.

The atomizer tube coming with this RTA is optional and you may or may not have it.

On top of that, the device also comes with several airflow control rings that can easily control the level of airflow.

Then again, this RTA comes equipped with a hybrid drip tank which is strong, bulky and spacious.

This in turn, makes the tank tad more functional and efficient.

The RTA also dons a top fill design that makes it look incredibly chic. With this design, the device turns out to be tad more efficient and functional.

The adjustable airflow control further aids in the job, thereby letting you control the level of air in accordance to your discretion.

The device also comes equipped with a perfectly new notch coil that is supported by cotton.

On top of that, being designed by Jaybo, it turns out to be even more, well designed and well formed. The art, on the other hand, is inspired by SMM.

What comes in the box?

The box of RTA comes loaded with one single unit of wismec theorem atomizer and two airflow control rings that can be changed according to your discretion.

It has a stainless steel tube which is strong and sturdy and a glass tube which too doesn’t break and is made of top notch materials.

The RTA comes with two notch coils that are supported with cotton along with three units of silicone rings.

There are also four screws and a screwdriver to get them installed right away.

The product comes with a warranty card and a user manual that lets you install the product in a jiffy. So using and operating this tool is no big hassle at all.

Why should you go for this product?

Well, all in all, if you’re looking out for a RTA which is smooth, well functioned and extremely powerful in matters of performance, this product can be a perfect fit.

It is smart, efficient and is one of best RTA theorems in the market.